One thing I often get asked is: ‘how do you find time to do everything?’. Right now I’m wondering that myself.

Settling back into ‘life’ has been more challenging than I thought. My travelling life for three weeks was a whirlwind of planes, trains, places and faces. The last three weeks back at home has been a whirlwind of school fete, dance eisteddfod, dentist visits and oh… work…

My April/May travels took me to London, Paris and Madrid. Was it great? Yes. Did I buy much? Yes – I’m sure I could have got more – except the thought of dragging it home stopped me many times!

I arrived in London (via Dubai in a huge A380 plane) on Saturday 13 April after 26 hours of flying (trip was much longer if you count the trip to the Sydney airport from home and into the city). It was COLD! I didn’t have much time to acclimatise as 7.30am Monday morning I was on a train to Paris.

I was in Paris for just three days – I had some work to do while I was there.

I arrive Monday lunchtime and had a little wander around Paris in the afternoon. I then had dinner with my husband’s cousin who has lived in Paris for 12 years now. We had a lovely night and it was such a great opportunity to get to know her better. Thank you Emma xox

I did manage to squash in some shopping with Barbara of Stitching up Paris. Barbara is a Kiwi (New Zealander) who has lived in Paris for 25 years. She’s a stitcher/knitter and knows all the places to take you in Paris – ALL OF THEM. she took me to lots and then left me with a list of more! Did I buy lots of fabric? No, not a scrap. Why? I knew Goldhawk Road was in my near future, courtesy of the Mega London Blogger’s Meet-up so I decided to focus on yarn and trims. I did visit the famous Montmartre fabric shops but if you want stories of fabric decadence then you better head to Roisin or Kim’s corner of the blogsphere.

Here are some of the things I got… 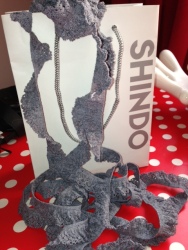 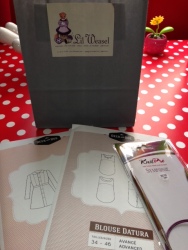 Barbara was fantastic, she was suggested to me by Busy Lizzie in Brissy. Thanks Lizzie! Paris and Parisians have slightly different shopping customs to Australia and also the language barrier was significant for me as a complete non-French speaker (it wasn’t compulsory at school – and I’m ok with that, this is the only time I’ve had to call on my v.limited French) – Barbara looked after all that for me!

I’m a bit of a second-hand clothes and charity/thrift/op shop nut. When Barbara discovered this over a cup of coffee, she took me along to one of best second-hand clothing charity shops in Paris where I found this Tara Jarmon jacket. I’m completely in love with it. I love it’s military styling, the silk patches, the rough stitching, the naïve embroidery, the zip gathered patch pockets. I’m definitely be going to make a jacket inspired by this piece in my future… 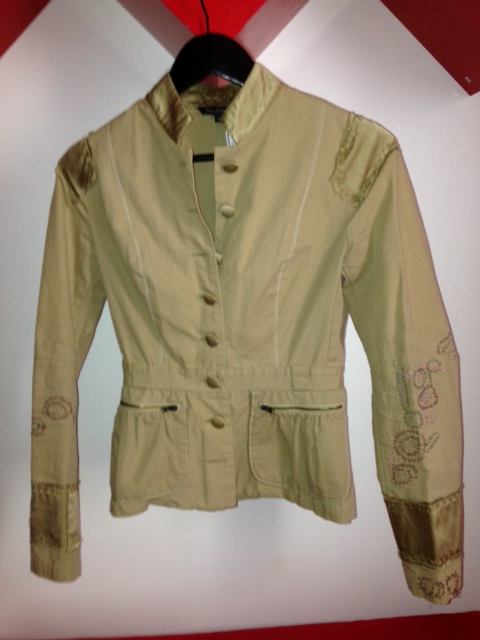 I love this jacket, it’s unique and fits perfectly. 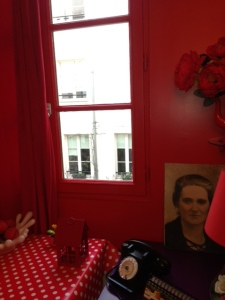 My little room in Paris

I stayed with a lovely and generous French lady Agnes, a place which I discovered via Airbnb. She was so helpful and I felt like I’d found myself a new aunt by the time I left! I think I enjoy her company as much as I enjoyed Paris itself.

After my work-related appointment on Wednesday morning (more on that later) I hopped on a train to London and was back mid evening. Friday I spent at home and in downtown Brixton – where you can get the most AMAZING burgers at Honest Burgers in the Brixton Market. Then I went to the theatre on Friday – squee! I love theatre and this was a real treat – it was The Audience and starred Helen Mirren.Via Twitter, I had ‘bumped’ into Claire-Louise Hardie, a professional theatrical costumier and sewing consultant to The Great British Sewing Bee. I tweeted the fact I work in a theatre and shortly after she got in touch and asked if I would like to see The Audience while I was in London. Yes please! She organised seats for myself and a friend at a fabulous price and we sat right under the nose of Helen Mirren, smack bang in the middle of the front row.

Claire-Louise Hardie & me outside the theatre: I’m not dressed very flash as I was cold and rather too tired to get fancy this night!

I met-up with Claire-Louise pre-show and had a little backstage tour and got to see the costumes, wigs, meet some of the cast and some of the costumes up close. This is a stellar show and a must-see. Apart from the legendary Helen Mirren and fabulous cast, the costumes are fascinating. A huge proportion of Helen Mirren’s costume/wig changes happen on stage (including wigs), she moves seamlessly from age to age and era to era – the trickery of dressing and undressing Ms Mirren on stage is genius. All I can say is Ms Hardie is quite brilliant – oh and she’s lovely. If you are thinking about sewing lessons, then this is the girl for you, she runs a sewing studio called the Thrifty Stitcher and has small group sewing classes in North London. I don’t have the opportunity to do these sorts of things where I live – but if I were you and lived in London what a fabulous way to improve your skills – with an expert AND in a working studio. Yes please!

I confess the first week was exhausting and I was slightly mad to attempt to do so much in such a short period after the mammoth flight from Down Under – but you live and learn!

The next day I was dragging a mammoth case (thank you Abakhan Fabrics!) across London to the V&A to meet up with Rachel of House of Pinheiro and another 50 or so bloggers… but that’s another blog post about the next 7 days…

And I have some blogger gifts to show you – just got to take pictures!

I have projects to share including a jumper, cowl and a soon-to-be-completed First Communion dress… soon…

and I’m mid-fabric search for this project…

And many many thanks for all your kind comments on my Elisalotte dress. It’s been facebooked, tweeted and popped up all over the web. It’s given me a real buzz!