I’m embarrassed to admit it but I’m pretty pleased with myself.

This is Simplicity 2060 aka the Lisette Itinerary Dress View 2.

I’ve called it “My Four Foot Dress’ and I’m rather happy about the result. Can you tell from that smug self-satisfied look?

Like the Lisette Passport Dress, it’s not a complicated affair but if you score a smokin’ fabric combination I would rather let the fabric sing than a complicated pattern.

I like this little pattern and I like the fabric combination I’ve chosen. And I can’t wait to wear it… somewhere, anywhere! I had planned to wear it to work today to show off however the weather, amazingly, turned lovely! Darn it! Around 27 degrees lovely which is more of a late-summer temperature than nearly-winter, so it shall have to wait until next week for its first proper outing. Boo hoo.

I confess I did wear it post-front-yard-photo-opp to drop off Miss 9 at a slumber party as a mini roadtest and was asked ‘Wow! Are you going out somewhere??’ Which I figure means I am dressed quite nicely… or so appallingly that it was in fact a gentle hint to go home and change. I’m sticking to Option 1.

When I saw this dress I immediately thought of making it in navy linen and using a Japanese fabric for the contrasting yoke and obi belt. I love having sewing visions! I’m a recovering patchworker and have long had a great love of Japanese fabrics, and this dress pattern was SCREAMING out for a little bit of Japanese fabric loveliness. The quality and prints of Japanese patchwork fabrics are just lovely, they popped up all through my many quilts over the years (BTW Japanese patchwork is also amazing, their attention to detail and handwork is extraordinary). My original vision was for a small cherry blossom print on a navy background but no matter how long I looked at the shelves of the only patchwork shop in town it just did not materialise. My conjuring talents are limited apparently. There was a cherry blossom print but the flowers were just a little too far apart. This choice was the next best option but I really like it, especially with my beloved brown boots (if I don’t say so myself). It’s sedate… rather like me…

I’ve always steered clear of linen as I have this real ‘thing’ about fabric that crushes (I even sneak around in shops crumpling up the clothes in my hand before I consider them as a ‘potential purchase’ to see if it’s going to drive me nuts – yes, shop assistants must love me). I know that linen is supposed to look like that but I just HATE turning up to work with a stupid seatbelt crumple line across my chest – it’s like turning up with pillow creases on your face. Not cool. This linen didn’t crush badly as I worked with it so I’m confident this dress is going to become a favourite. (No I’m not a control freak… I’m just particular about some specific things… I like to think of it as adding ‘interest and texture to my personality’… rather like pretending I don’t have dirty blonde curly hair…)

I’ve read several recommendations not to use quilting fabrics for dressmaking as they don’t tend to drape well but I think it works for this dress – am I delusional? Well I am often delusional but I don’t think so in this case!

This is a lovely little pattern. I cut size 8 and graded out over my hips to a size 10 as the linen had no give in it. Some of the pattern reviews said it verged on small – others said big. I think I could have gotten away with 8 all the way but I’m happy with it as it is as leggings will fit under it nicely in our colder months with plenty of wiggle room. Yes, when it gets down to a frosty 16-18 degrees in the middle of the day. LOL.

It was an easy pattern to cut out as the shape is very boxy without the obi belt. So I whipped out the old patchwork rotary cutter and had it done in no time at all.

I struggled a bit with the sleeves but the light at night in my sewing room is extremely poor (need to get a table light) and sewing navy at night is no fun at all!!!

The pattern for View B actually has curved hem at the sides however I preferred it straight like the pattern envelope. So I skipped the curved edges and squared it off. I’m not a big fan of the big shirt look on me. I feel like a little person wearing big person clothing.

I also lengthened the obi belt to a size 10 as I had read some reviews where it did not meet at the back. Mine overlaps by quite a bit and I’ll have to do some research as to whether this is what an obi belt should look like – or whether the Japanese are more free-wheelin’ about the back view of their obi belts! The pattern said to slip-stitch the opening of the obi belt closed. I just tucked in the raw edge, ironed it and then used my tricky little edging foot (oh how I love my Bernina presser feet – probably more than my high heel collection right now – which is saying something) and just stitched a little closer to the obi edge than the pattern suggested. The raw edges have been firmly caught inside and the edge is very neat. I love this presser foot, I also used it for the edge stitching on the contrast yoke. It’s a very fast and easy way to get a consistent top stitch seam. 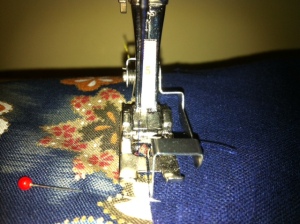 I went a bit nuts trying out my Bernina presser feet and used four different presser feet on this dress. The standard foot, the overlocker foot for seam neatening, buttonhole foot and the edge stitch foot.  So I’ve called this my Four Foot Dress (I’m actually towering five foot four, only one foot two shorter than my ELH – ever lovin’ hubby). I’ve had my machine for about eight years now and only ever used two feet. Why? Because I was a patchworker and I didn’t have a need for the other fancy feet that came with my machine. However a new stitchin’ day has dawned! Hello Sunshine : )

The buttons are from my stash – coconut shell buttons all the way from Tonga where the ELH and I honeymooned. They have been waiting for the right outfit for…. quite some time! I can easily get this dress over my head without opening the button closure (in fact I just stitched the button  on my shoulder right on top of the buttonhole, rather than cutting the buttonhole open). Despite the fact the dress doesn’t need the button opening, if (or when) I make this dress again I would still do the button closure as I think it gives the dress a nice finish. It would be rather plain without.

I like the sleeve length but am tempted to add a little finishing touch with a button on the outside of the sleeves at the cuff with a little thin loop of obi fabric coming from underneath and around the button- does that make sense? Not that the sleeves need it but I think it would be a nice finishing touch. I might try pinning it on and see if it works or if it’s overkill.

I like buttonholes. They freak lots of people out but I think they are FUN. My Bernina has this super dooper (technical term) buttonhole foot. You put on the foot, set your machine to buttonhole stitch and then press the reverse stitch button when you get to the bottom of the buttonhole. The trusty Bernina takes over from there (just keep an eye that the fabric is feeding through straight) and every buttonhole you do after that is exactly the same. Fabulous!

There is quite a bit of fabric over of the contrast material when you cut out this dress (assuming you are well behaved and cut the obi ties out on the bias). So I cut the remainder into bias strips in preparation for another Tardis Skirt – or it might make a nice contrast trim on a Sorbetto top. Now there’s a thought!

I haven’t quite finished all the stitching on the obi belt – I was too excited and wanted to try it on RIGHT NOW and take a photo.

I love being naughty.

Now what to make next??

12 thoughts on “THE FOUR FOOT DRESS…”